In this post I’m going to setup a Clientless SSL VPN via the ASDM GUI and then connect to it via the TinyCore Linux PC all from GNS3.

I’m using the topology above. The nodes I’m using will be the ASA with the ASDM connected via the cloud from my local PC, if you want to know how to set the ASA up with access via the ASDM check out one of my other posts: How-To: ASA in GNS3 with ASDM

I’ll also be using R4 and the Remote Worker PC which is running a TinyCore Linux to test the Clientless SSL VPN.

When you log into the ASDM GUI you’ll get the main screen above. Click on Wizards > VPN Wizards > Clientless SSL VPN Wizard…

The Clientless SSL VPN Wizard window will pop up, click on Next. You’ll get the following window. 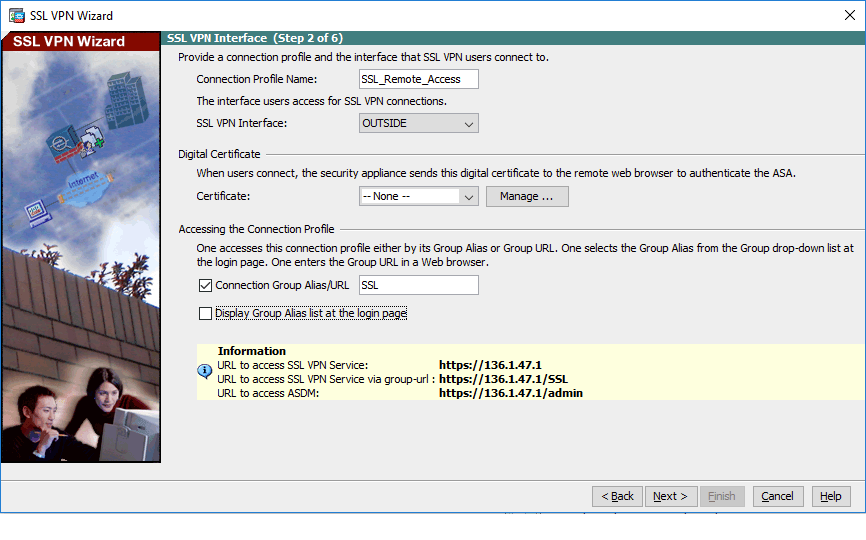 Here you need to give your Clientless SSL VPN a Connection Profile Name I’ve named this one SSL_Remote_Access and I’ve also selected the Interface that the SSL VPN will connect in on which is the Outside Interface (Internet). I don’t have my own digital certificate so I’m leaving the Certificate set to None, because of this the ASA will provide a self signed certificate. I’ve also given the Connection an Alias of SSL. Click on Next

The next step is to configure User Authentication you’ll have the choice to use an AAA server (which I dont have) or the Local User DB which I’ve selected. Select Authenticate using the local user database and add a new user, here I’m adding Homer once added click on Next 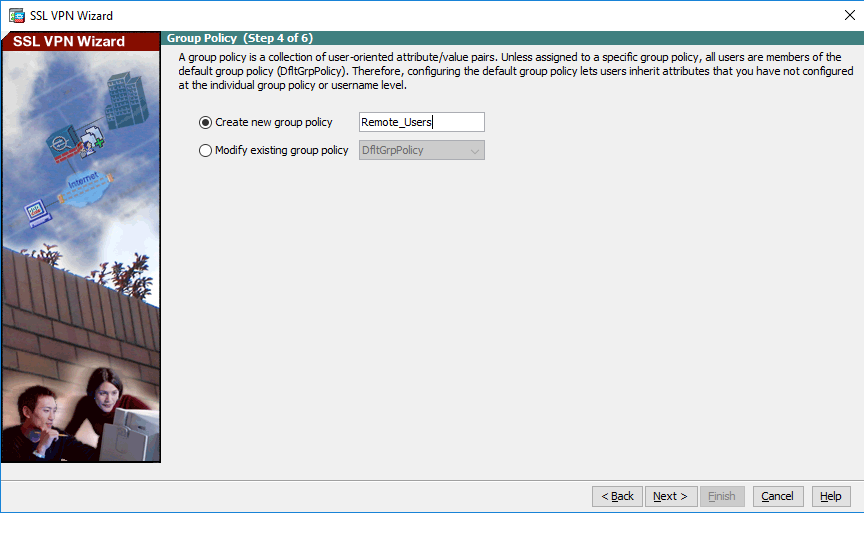 You need to configure the IP address of the EMAIL server. I don’t have an email server in my lab but the bookmark will appear once I connect to the Clientless SSL VPN (hopefully).

That is it, you’ll get a summary page click on Finish to send the config to the ASA.

Set the IP address and the Gateway and click on Apply

It is always good practice to test the connectivity, open a Terminal Window in the Linux PC and ping the Gateway at 200.0.0.1. 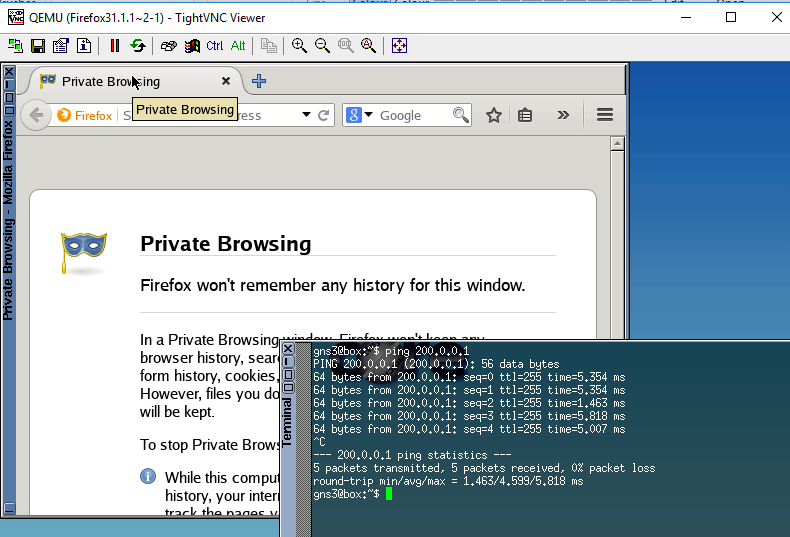 Now using the built-in Firefox browser on the Linux PC it is time to test the Clientless SSL VPN and see if we can connect to the Corp LAN. In the address bar enter the URL  configured earlier which is: https://136.1.47.1/SSL

Looks good because this is a self signed certificate from the ASA the Firefox brower gives you a warning not to trust the site. Click on I Understand the Risks to continue. Once you accept the risk you will get the following login page.

Enter in the username and password in my case Homer.

Success !! I have logged in and as you can see the EMAIL bookmark I configured during the Clientless SSL VPN setup is there.

I hope you found this useful, get labbing and try it out for yourself.

After struggling to get the ASDM to work in GNS3 I thought it would be a good idea to write a blog post on how to get the ASA and ASDM working within GNS3.

Below is the ASAv image I am using and also the version of GNS3. Note if you want to run an ASAv image you must run it in GNS3VM and not in the GNS3 local.

The GNS3 team have a great video showing you how to import the ASAv image into GNS3.

I would strongly recommend that you view that video.

They also recommend that you use the ASAv directly from Cisco’s VIRL software. A google search will get you the image you need.

I had a few issues getting the ASDM GUI working initially, note that you do NOT have to import the ASDM .bin file onto the ASA it is already on there even if you can’t see it when you do a dir, trust me it is!

Below is the topology I am using. Drag your newly imported ASAv image onto the workspace along with the GNS3 Ethernet Switch and the Cloud object. Connect the ASA Management 0/0 interface to the switch and then using another port on the switch connect it to the Cloud and select eth1 as the interface on the cloud, the eth1 interface should be bridged from VMware to your local machine.

When you go into enable mode it will ask you for a password don’t panic as you just press enter and it will continue into enable mode this is the default behaviour of the ASA. Go into configuration mode and configure the management interface as shown above.

Next, we need to enable http servers on the ASA to allow us to access it via the ASDM GUI.

The commands to do this are #http server enable and #http 0 0 mgmt. I cheated a bit by using the http 0 0 mgmt command. I could have said only allow the IP address or subnet of 192.168.159.0 access the ASA via the ASDM. The command I used above is basically allowing any IP to connect to the ASA because this is just a lab that is fine you wouldn’t want to do this on a production ASA.

So you are all set now to access the ASA via the ASDM GUI. Open a webpage and enter the IP address that was assigned to your management interface via DHCP. NOTE you must use HTTPS:// after all it is a security device we are accessing here.

You will get a warning message when you first try to connect to it saying that it isn’t secure as the certificate is a self-signed certificate from the ASA and your browser will not recognise it as a trusted site. Just click on Advanced and add exception.

At this stage, you should get the following screen. Note you’ll need to have java installed on your machine to be able to run the ASDM. Select Install ASDM Launcher this will install an icon on your desktop so you can run the ASDM directly from there which will save you having to go via a webpage each time. When you start the ASDM launcher you’ll be asked to put in the IP address which will be the IP address that was assigned to the management interface. I didn’t set a username or password just click on connect.

This blog is a place to store my study notes for the CCNA Security 210-260 cert as I make my way through the blueprint.